In the midst of the crisis, a chef launches a charity to feed the most vulnerable of Edinburgh 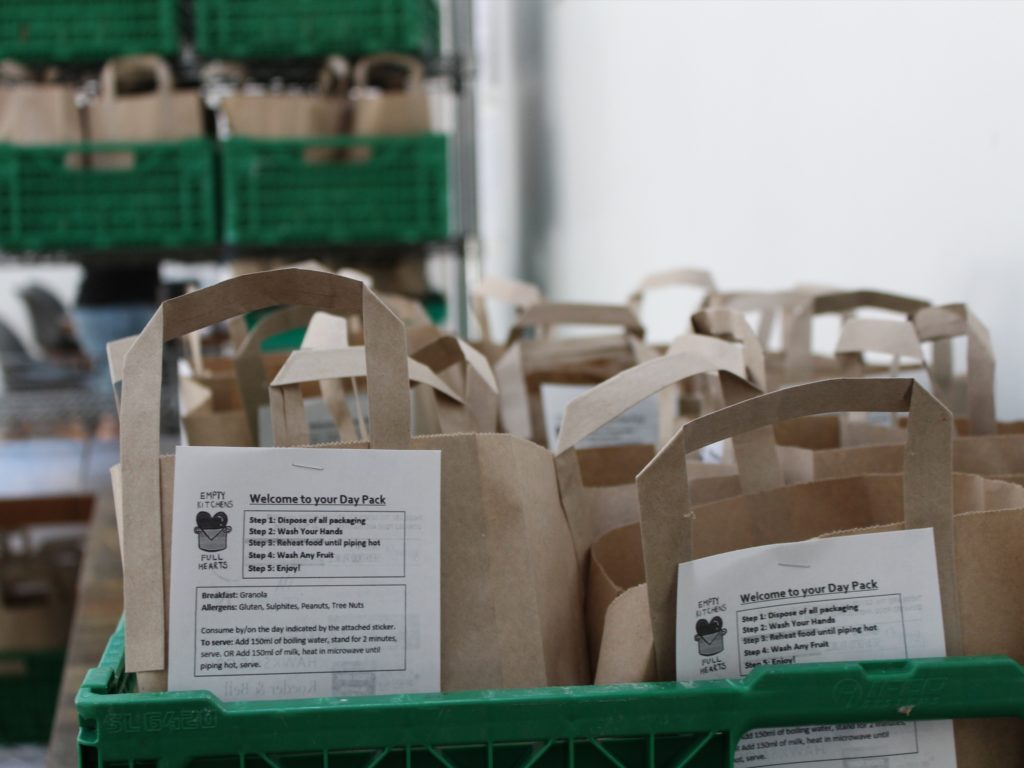 In two months, the charity has turned 15 tons of food into healthy meals. Credit: Eldor Arbel

It’s not just pain and death which are now synonymous with coronavirus. It’s also food poverty and isolation. When the lockdown was announced in late March by Westminster, Lewis MacLachlan, a 28-year-old Scottish chef, already expected it. At this time, he founded Empty Kitchens, Full Hearts, an initiative aimed to feed local self-isolating residents and people who are unable to access food. “I knew a lot of people would be in need during the coronavirus crisis” he explains. Three months later, Lewis is exhausted but he is not the only one. At present, one hundred volunteers work flat out alongside him to deliver more than 1000 meals a day. An intense organisation which requires a constant commitment. “As a chef, I’ve worked shifts longer than 30 hours so I’ll be fine for a while but I will need to stop for a few days soon. I’m no longer as young as I once was” he told me in May.

Not a long time ago though, Lewis was back at university. “I’ve been a chef in Edinburgh for about ten years. Last year, I left work to do my Master’s Degree at Queen Margaret University with the hopes of getting a job in a trade union to help chefs be better treated” he explains. But mid-March, the pandemic hit the world. When the lockdown set in, the university closed its doors, alongside hundreds of restaurants and hotels in Scotland. “I had a lot of desperate friends around the country who called me saying that they’ve had been laid off, with sometimes nowhere to go. At the same time, a lot of elderly people in town would have to choose between risking infection or feeding themselves. And the homeless and people facing food poverty before the crisis or because of it were also in danger”.

Concerned about the foreseeable humanitarian crisis, Lewis then decides to open a temporary kitchen to help the community while allowing chefs to cook again. Like Nikita, a 25-year-old chef, who previously worked at Crieff Hydro Hotel, a luxury resort in the Highlands. “They laid me off the day before the Job Retention Scheme was announced by Rishi Sunak. As I was also getting accommodation through my job, I ended up homeless. Lewis hosted me at his place in Edinburgh and then offered me work at Empty Kitchens, Full Hearts” she tells.

At first, Lewis and his friends settled at Bridgend Farmhouse, a community-run charity in the South-East of Edinburgh. In normal times, the farm runs a cafe and hosts several workshops to learn how to cook healthy food, fix their bikes or build an eco-bothy. Due to coronavirus all these activities had to be suspended. In-March, a new venture was however about to kick off: to convert the farmhouse into a local emergency food cooking and distribution centre. “I was in the middle of setting up the whole thing when Lewis approached me with a similar idea. He proposed to take over the kitchen side of the project” explains Eric Fernandez-Baca, the 45-year-old food project manager at Bridgend. And this is how everything began. Having been closed for a while, the kitchens of this historic 18th building came to life again. 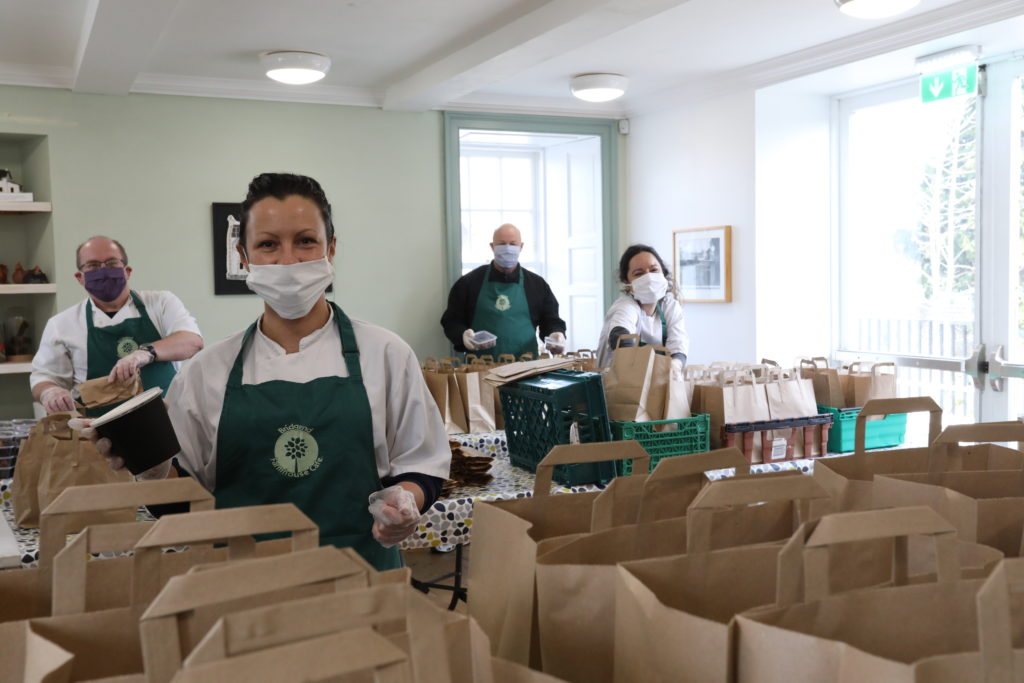 Swiftly, the initiative takes off: thanks to their call of donations, Lewis and Eric receive £4000 in just a few days. At the same time, several restaurants in town, now closed, give them their surplus food. And for its part, the farm activates its own network of volunteers. “We’ve called for people who were already working in hospitality, whom we didn’t have to train to hygiene norms” explains Eric. Like Carmen, a 31-year-old Spanish part-time waitress in Edinburgh: “It had been almost one and a half years since I had been coming to Bridgend, especially to learn how to build an eco-bothy. With the crisis, my restaurant shutdown and I got furloughed. At present, I’m going at Bridgend almost five days a week”, she says. In total, around 60 volunteers are mobilised to cook, pack and deliver some healthy meals.

The first week, 70 packs a day are distributed, each containing a breakfast, a lunch, a snack and a dinner. These are given to the people of the housing estates surrounding the farm, some of which are in, like Gilmerton or Niddrie, among the poorest areas of Edinburgh. “We deliver some meals to the shielding groups, those self-isolating at home and other people in need. We are accepting referrals only from local community, religious, educational and health-sector organisations”, it is said on Bridgend Farmhouse’s website. As the weeks go by, the farm reaches 350 packs a day. 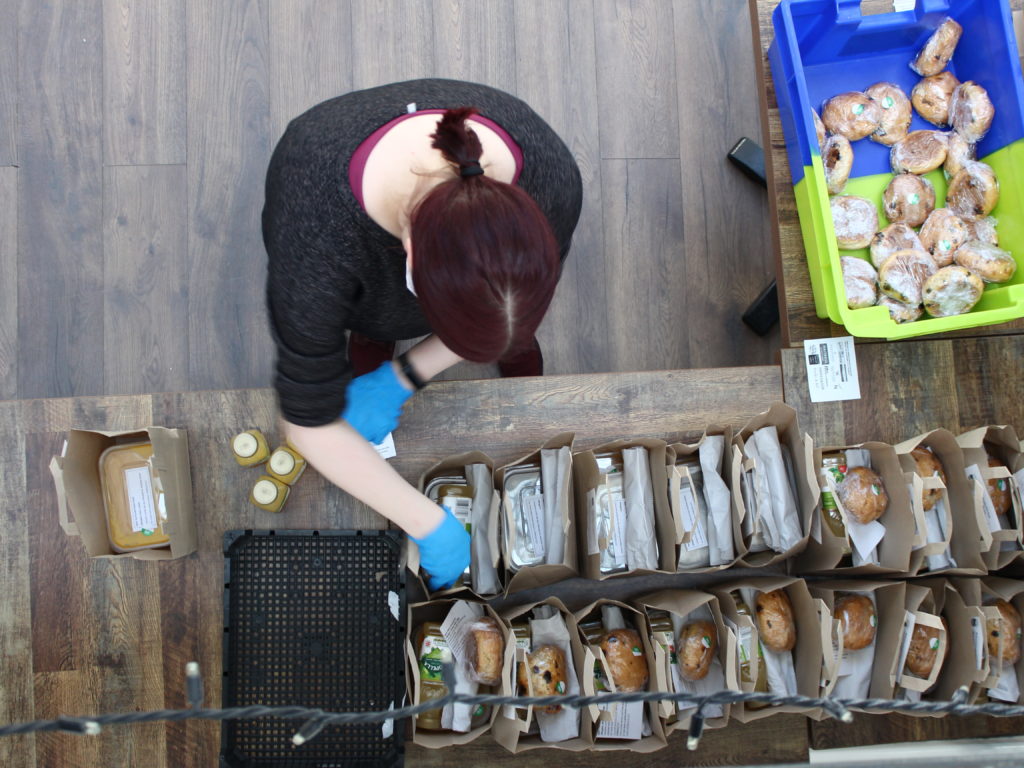 The idea of Empty Kitchens, Full Hearts is to provide healthy food to the community. Credit: Eldor Arbel

The relocation in Leith

And then, at the end of April, Lewis receives a proposal: The Old Dr Bells Baths, a multi-purpose venue in Leith, East Edinburgh, is ready to host them. In this deprived neighbourhood nearby the harbour, there is also an important in need population. Not to mention that the kitchens are bigger and Lewis sees the opportunity to help more people. While Bridgend Farmhouse keeps delivering free meals in the South-East, the chefs of Empty Kitchens, Full Hearts then move over there. And once again, volunteers flock over. Like Duncan, a 30-year-old male sales manager put on furlough: “There is nothing to do at home, I’d rather come here to give a hand” he says.

Since its new settlement in Leith, the community organisation has been able to count on the help of several restaurants, for example the Walford Astoria Edinburgh – The Caledonian, which gave them the equivalent of £10 000 in food and equipment. Like in Bridgend Farmhouse, the volunteers also work hand in hand with FareShare, a charity which picks up the surplus of the supermarkets in order to reallocate them to frontlines charities and community groups. On top of that, there is the help and donations of a few companies like WD Catering Solutions, a Glasgow-based company which gave Empty Kitchens, Full Hearts two fridges and fixed some of their equipment, for next to nothing. 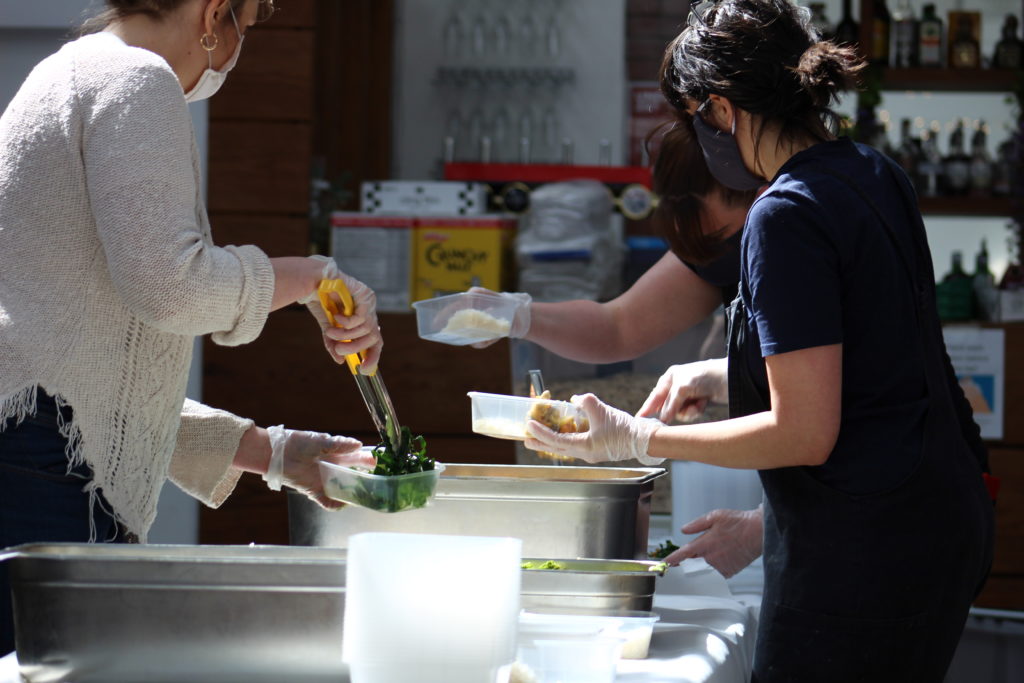 In total, the Leith-based organisation has been granted £3000 from the government and the council, out of a potential £65 000. Why so little? “We say we can feed a family of 4 for a week on £25. The companies the government has funded say it would cost £140! Everyone else lies so much that when we say we can do it, the authorities think it must be rubbish.” As a result of that, 65 % of their funding has come from individuals. And housing associations have started to fund them in small amounts.

Thanks to them, between 350 and 650 packs per day are now delivered, each containing breakfast, lunch, snack and dinner. Simultaneously, the teams also distribute around 100 hot meals to the people in the neighbourhood, an operation called “Lunchtime on Leith”. And as for the deliveries, everyone can benefit from it: “We don’t ask for any proof, we don’t want to make anyone feel ashamed of it” explains Louise Thompson, the 27-year-old project manager. Lindsay, a 40-year-old mother of two, didn’t hesitate to ask for help: “Thanks to them, I receive one pack a day. It’s really a relief because I’ve got my kids to feed everyday”. 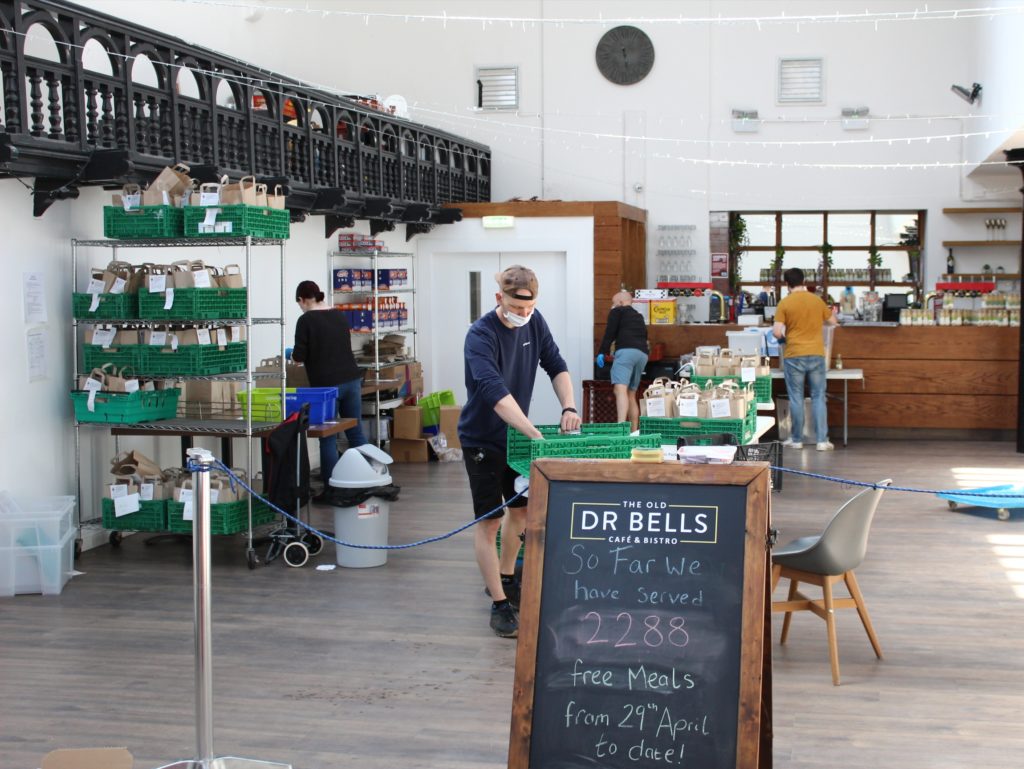 But for how long more will people like Lindsay get some free food? No one can tell. Yes, the Scottish government said it will continue to help families who struggle to feed their children during school holidays. The funding will see the scheme extended from the end of June through to the start of the new term in August. But Empty Kitchens, Full Hearts may not survive that long.

The money raised is now coming to an end. And the National Lottery, which had yet promised to fund them for months, just let them down, arguing that “there is a huge demand on our funding currently and with such a large investment already made to food provision across Edinburgh, this is unfortunately not something we can support”.  Also, with the hospitality industry set to be back up and running on the 15th of July, the volunteers will have to move out again soon. “Just to be clear: The Old Dr Bells Baths are incredible and we’re just trying to get out of their way for when they start trading again” indicated Lewis on Facebook, though.

At the moment, Empty Kitchens, Full hearts is therefore looking for new funding and a new long-term kitchen. Despite these difficulties, Lewis wants to believe that it’s not the end of the charity: “Nothing will stop us feeding our communities” he says. In fact, the number of people in need isn’t expected to decline any time soon. The Scottish economy might be the worst hit in the developed world. In fact, the official numbers are quite terrifying. Scotland’s GDP plunged by 18.9 % during April. Just between February and April, unemployment rose by 30 000 to 127 000, as lockdown struck the labour market. And in the UK, the jobseeker’s allowance is still around £70 a week.